I recently turned 60 years old and to celebrate the occasion we threw a big bash and I made a playlist of music to play at the party. This compilation was comprised of some favorite songs,  and some songs were just whatever popped up on our computer and seemed to fit with the sequencing. I was feeling hurried, but I  did gather over four hours of music!  Did I play any of it?  Hardly. The computer's juice ran out early on, and I became too caught up with people, (and all the food!). So in honor of missing the chance to share music with friends, family and acquaintances, I decided to re-create that Birthday Playlist, visually. Of course, I created the parameters of this project and they are: each piece must contain a heart shape; I must not delete any songs from the playlist; the songs must be titled in the order of the playlist; I can make them, though, in any order; and I would try to interpret the spirit or meaning of what I see/hear in the song,

​ The playlist had 63 songs on it but two of those were different renditions of the same song, so I hope to make 61 pieces. Eventually. Here is what I have come up with so far and I have included a music player near each piece so you can listen to the song in question.
​

This Song is Dedicated to the Berkeley High Jazz Program 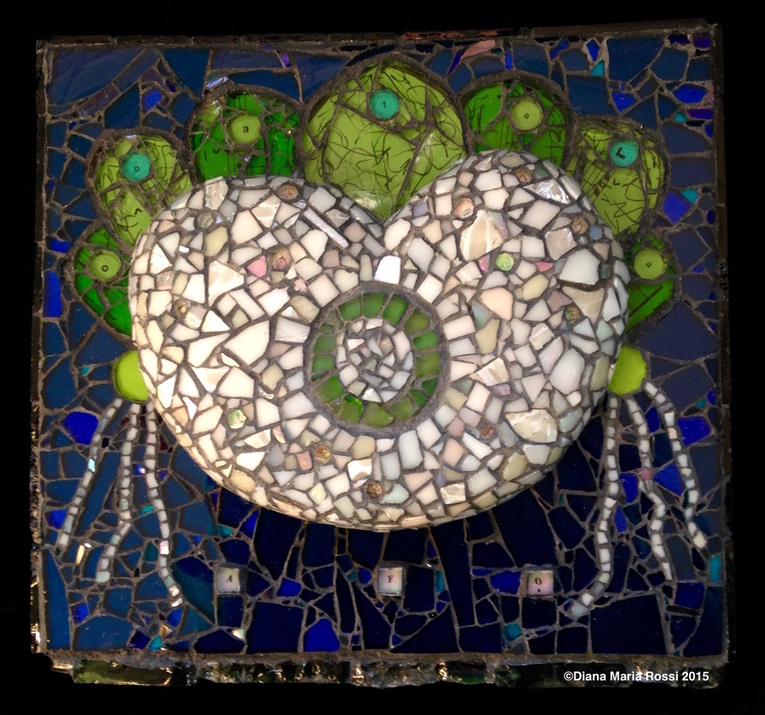 "The Birthday Playlist: #4 Who Knows Where the Time Goes?"

This Song is Dedicated to Claudia 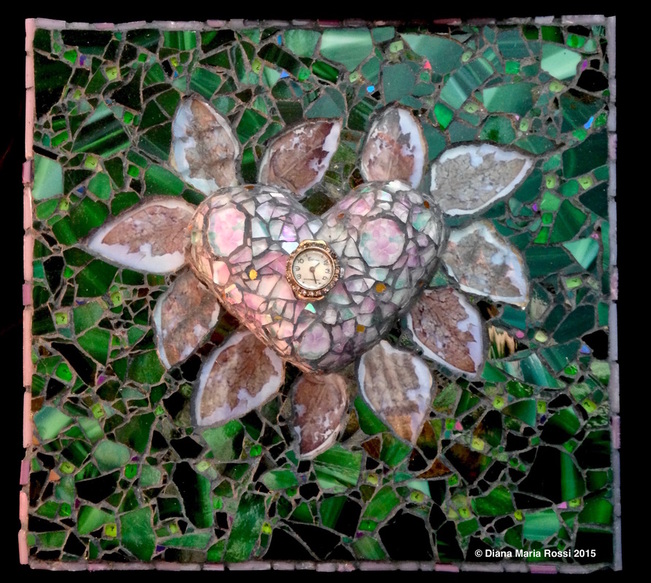 "The Birthday Playlist: #4 Who Knows Where the Time Goes?" 8"x7.5"x2" glass mosaic on wood with text, photos, watch and drawings ©Diana Maria Rossi 2015

This Song is Dedicated to Jeff 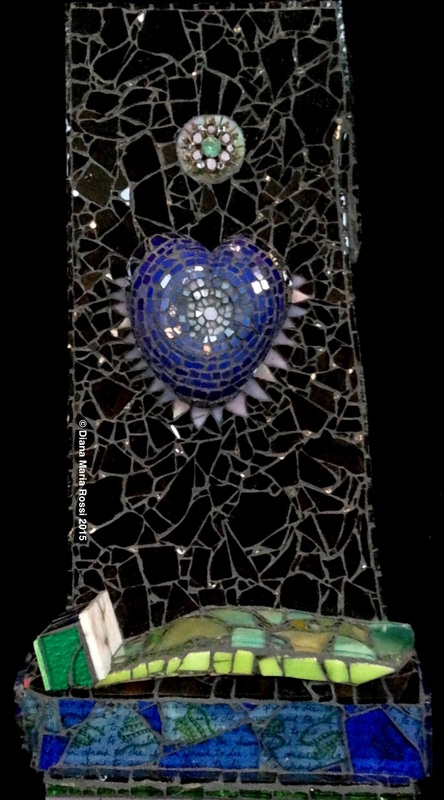 "The Birthday Playlist: #6 You Found Me"

"The Birthday Playlist : #19 When the Saints Go Marching In"

This Song is Dedicated to A.J. Rossi 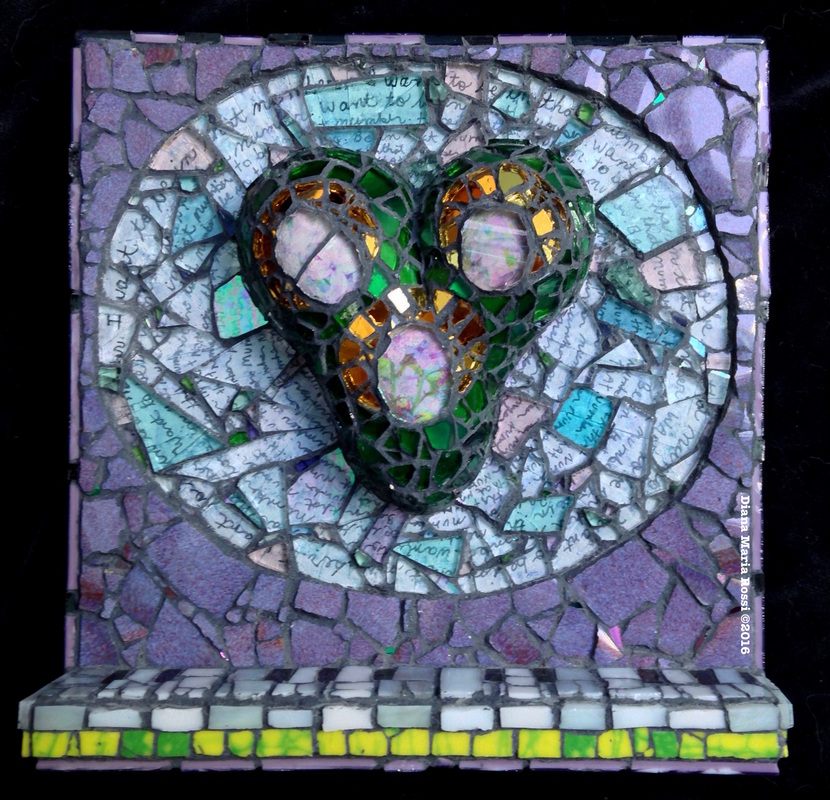 I included two versions of “When the Saints Go Marching In” on my playlist,  because it was one of my Father’s favorite songs and also, because it is one of those tunes that lends itself to improvisation and just about every version sounds different from the last. The origins of the song are somewhat in dispute, but it is known as an American gospel hymn that is performed by jazz bands. The lyrics are numerous and can change.

For my interpretation, I chose to use  New Orleans Mardi Gras colors. (I spent 3 years of my growing up in Southern Louisiana, one of those years in New Orleans.) The Mardi Gras colors were selected in 1892 and purple connotes justice, green faith, and gold power. Those sound like Saints’ colors to me!

I thought of those three ovals on the facade of the heart as generic faces with the mirrored gold as auras or “halos”. Under the face ovals I used photos of lilacs (kind of faint and not too recognizable — but that is ok). Lilacs are in my personal pantheon of “favorite flowers”. I wanted flowers because I had been thinking of one of my  revered childhood saints,  St. Therese of Lisieux who was called “The Little Flower”.

Around the heart, I created a full body nimbus with the words, “I want to be in that number”, inscribed over and over and over. This is in reference to the very same repeating line of the verse. Originally I had intended to use the line, “you ARE in that number”, but I think that might have been on an unusually optimistic day, and I decided to go with “reality”.

I needed to include a piano keyboard because “When the Saints Go Marching In” is forever associated by me with the surprise farewell party that my parents’ family threw for us when we moved to Louisiana in 1967. We walked into the surprise party in an upstairs reception hall and one of my cousins (was it Johnny Tuch?) was tapping  out the melody on the piano.
​
I was able to expand my color palate in this piece by using the purple ceramic (thank you Nancy Aly!) in combination with my more usual glass. In my opinion, purple is such a glorious color! worthy of a saint. 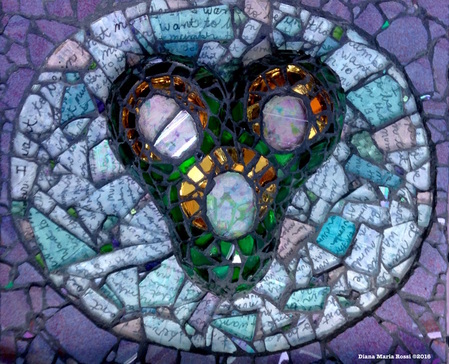 " The Birthday Playlist: #20 What a Wonderful World"

This Song is Dedicated to Beth K. 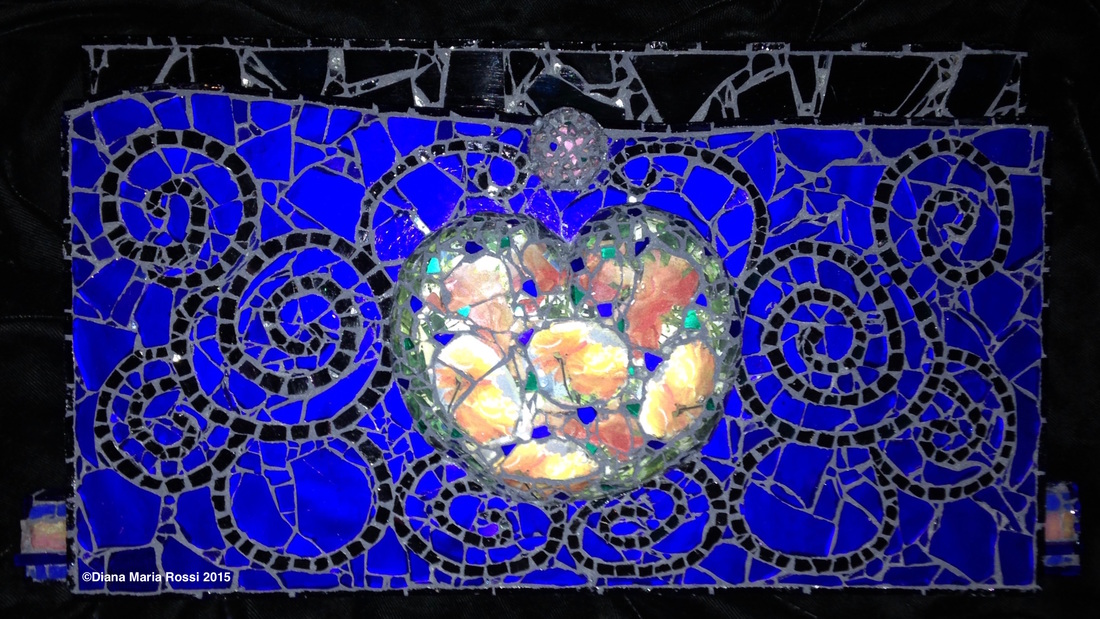 This Song is Dedicated to Sister Alexandria 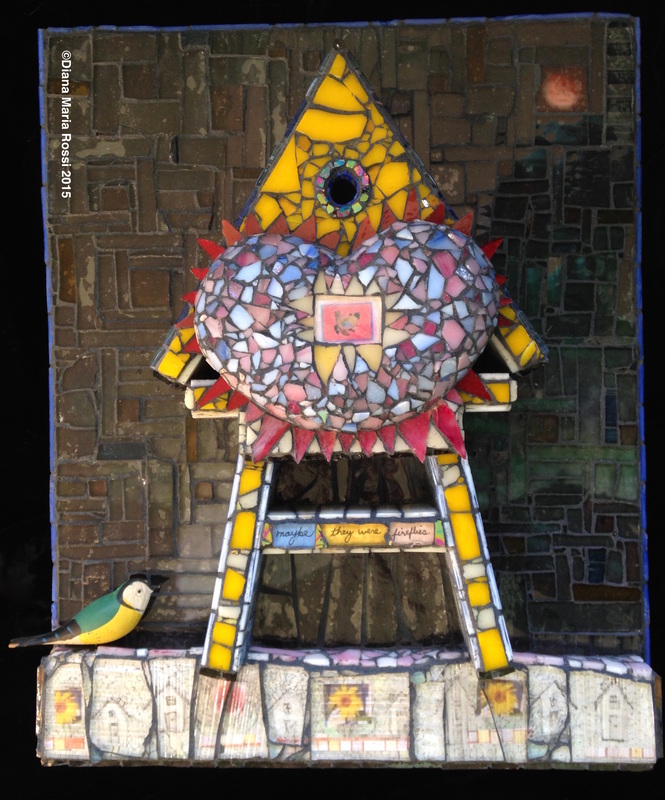 This Song is Dedicated to Jacob Krasniewicz, my Grandfather

“Jacob’s Ladder” is an African American spiritual that has been performed in different variations by many performers. The recording that inspired my sculpture is Bruce Springsteen’s interpretation of the version originally performed by Pete Seeger. This is the rendition that has the refrain, “we are brothers, sisters all”. (Which I just love.). This refrain comprises the text running down the sides of this sculpture.

I have discovered that there are many different cultural manifestations of “Jacob’s Ladder” beginning with the biblical story and including a children’s string game, a children’s wooden block puzzle, and a geometric concept in mathematics. Except for the children’s wooden block game/puzzle, I tried to keep all these visions of the term in mind, as I composed this piece. (I have already used a broken wooden Jacob’s Ladder puzzle as a base for another piece. See my sculpture, “Junior High”.) The crossed diagonals or diamond shapes are very directly lifted from the string game pattern. The math idea deals more with topographic infinity, and I think I was only able to incorporate that part in intent, thinking of the song lifting us “higher and higher”.

This piece became very personal to me when I decided to acknowledge my maternal Grandfather, who was named Jacob. He is at the center of this piece. I used black glass for the heart to symbolize the black velveteen Polish folk costume vests, that my Babci (Grandmother) brought back for many of her granddaughters from Poland. These vests are laced, crisscross, in the middle (like the Jacob’s Ladder string game!), and are decorated in elaborate patterns using multi-colored sequences and beads. The bottoms of the vests are trimmed in rickrack. I tried to evoke these vests in how I made the heart. And I used real rickrack, under the glass trimming the bottom edge of this piece.

My Grandfather Jacob loved to grow roses and that is why I placed the rose photos (from my garden) up and up “the ladder”.  I never had the privilege of meeting Jacob, (as have none of his 25 grandchildren), but I grew up with stories of his kindness, nurturing and his homesickness for his native land. (He also knew how to sew without a pattern and once made my Aunt a coat trimmed with fur.) I thought of his descendants, climbing his ladder, aiming for perfection or heaven or just something out of reach,  making the world better, all together, brothers sisters all.