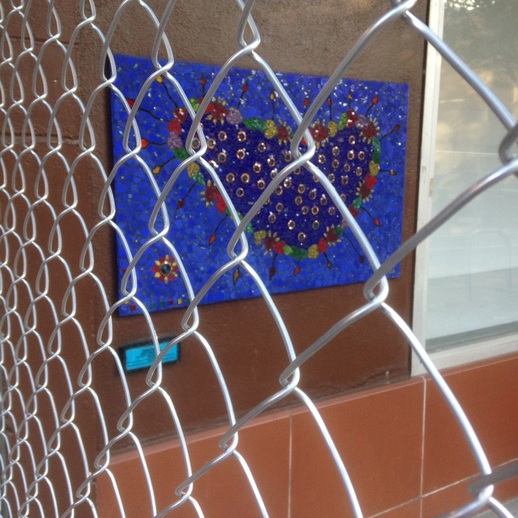 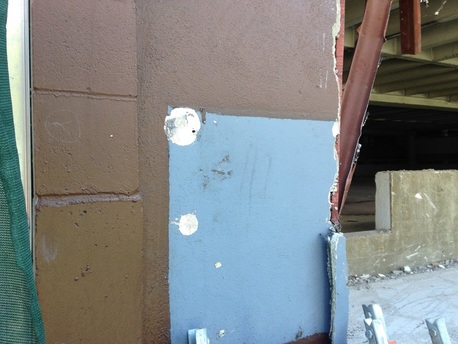 "Good Fortune" has been taken down by the City of Berkeley and put into storage somewhere* . I knew that this would happen some day, as the parking garage on which "Good Fortune" was located had been scheduled to be torn down. The mosaic was removed this past July.
​
However, as of now, I have no idea where the City of Berkeley will re-install this mosaic. The City has no idea either. The people in charge actually proposed relocating this mosaic to the INSIDE of the new parking garage, somewhere towards the back.  I said, "no way!". This is on outdoor mosaic that was meant for people, including small people, aka children, to encounter as they walked down the street.  A structure that houses cars  would not be appropriate for a work of this scale, and a mosaic made with such small tesserae. I will keep you informed of what happens. This mosaic is owned by and has been paid for by the citizens of Berkeley.

UPDATE: 2/27/17 I have been informed that "Good Fortune" is in storage with Public Works (city of Berkeley), which is what I assumed, but it was just confirmed.

​UPDATE #2   6/28/17: I just attended my first City of Berkeley Art Commission meeting. I should have gone a year ago! Perhaps, I could have shortened the "drama". Here is the letter that I read at the meeting:
June 28, 2017

My name is Diana Maria Rossi and I am a 22 year resident of Berkeley. In 1999 my work was chosen to be a part of the Addison Streetscape Project. After meetings and consultations, it was decided that my proposed piece was too dangerous and too fragile to be installed on the Addison sidewalk. Instead, it was decided in consultation and with my tacit approval to install my piece on the outside of the city owned parking garage on Addison St., to the immediate right of the new Freight and Salvage and to the immediate left of the Addison Windows Gallery. This was a perfect placement for this piece as the kernel for its inspiration was the song "Magic Penny", written and performed by Malvina Reynolds, a long-time Berkeley resident and folk singer.  (In fact, there is a Malvina Reynolds quote imbedded in one of the poetry panels, nearby in the Southside area of the street's sidewalk.) However, when we spoke of the City-owned parking garage, I was told that at some point in the undeclared future, that this garage would be torn down and my piece relocated. I was told that I could have a say in the relocation of my piece. Because of the quasi -collaborative and good nature of my original dialogue with "the City", I felt confident that when the time came to tear down the garage, that there would be a thoughtful new placement.

Well, I am here before you today to say that sadly, that was not the case. I am not here to blame any one individual. The combination of a City's Government and the passing of time is enough to befuddle even the best of intentions. Ms. Merker and I have exchanged almost two years' worth of emails in regards to  the relocation of this project. I am sure that her intentions, as are yours were and are honorable --- we all have too much to do, too much on our plates. I can understand how the relocation of the glass mosaic mural that I made and was installed in 2002 is not of the highest of priorities.

The piece in question, is 39.5"long x 25" high .75" deep and is titled "Good Fortune".  It contains the photographic faces of 47 children, approximately the size of a penny, each disc surrounded by copper smalti. The discs swim in a sea of cobalt blue glass and this "sea" is looped by a wreath of leaves and hearts. On the bottom left corner is a photo of Malvina Reynolds, collaged on the head of a Lincoln penny, that says, "In Love We Trust".

I know that "Good Fortune", is not a major work in your collection. It is not big in scale. I am not a famous artist. (Yet:) However, "Good Fortune" is owned and paid for by the citizens of Berkeley and I am the steward of it.  Part of my contract said that I would go and clean "Good Fortune", periodically. I wanted that clause in my contract, as I wanted to make sure that the piece withstood the elements, and for the most part, it has. (One small side piece came off at one point and I epoxied and grouted it back on.).

"Good Fortune" was designed as an outside mosaic mural and the correct materials were used to withstand weather. Multitudes of mirror tesserae were embedded in the cobalt blue glass, in order to reflect light. The whole surface is reflective and comes alive in light, especially sunlight. (Although, it is a pity that the City chose not to light the piece at night --- but that is another story.) The tesserae in this piece are tiny. The photographic faces are small. The piece is meant to be viewed, up close, and in full light. We even installed "Good Fortune", lower to the ground, than usual, in order to make it accessible to children --- so children could touch the faces of the other children, their symbolic counterparts. The piece was designed and installed so that the public, wandering along a sidewalk, could encounter it casually.

I have included, in this packet, photos of the piece, and almost two years of emails in regards to its relocation.Please contact me with any questions about this piece, its making, or my trials in helping to relocate it.

Respectfully,
even though to be honest, I feel somewhat disrespected, 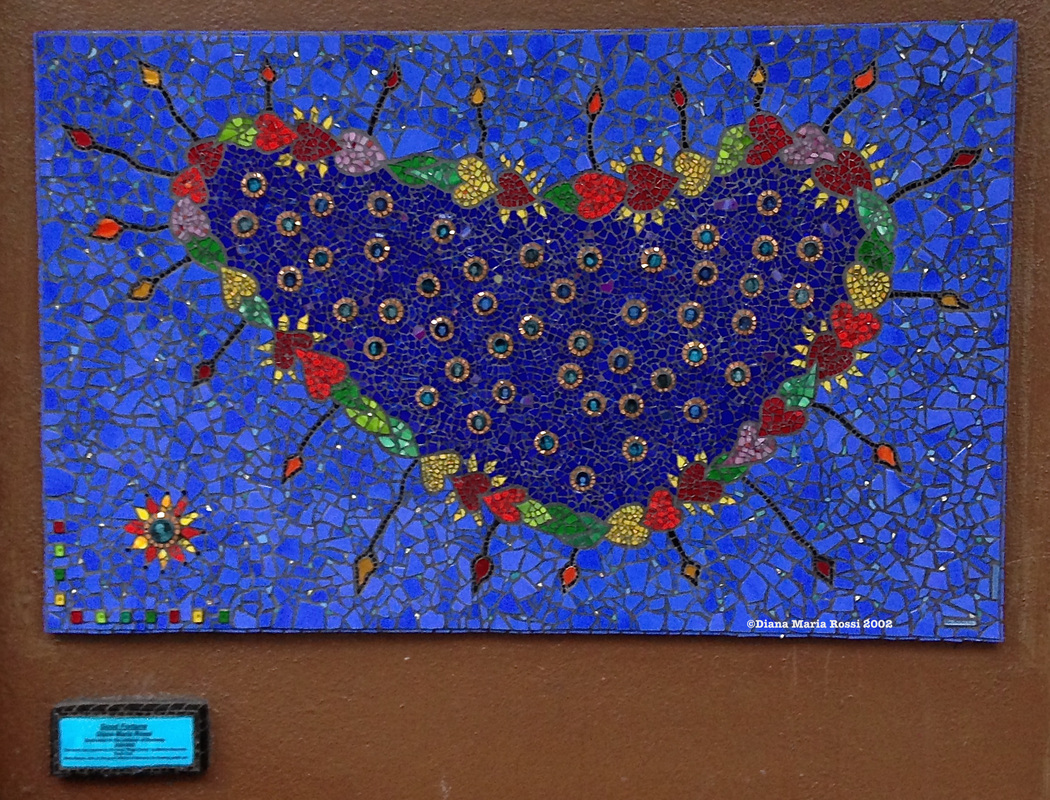 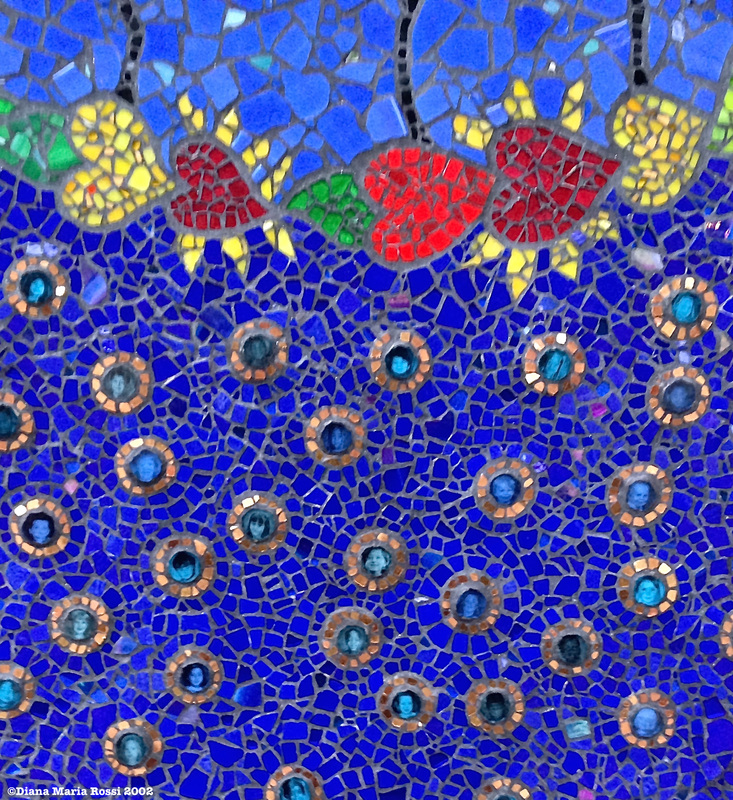 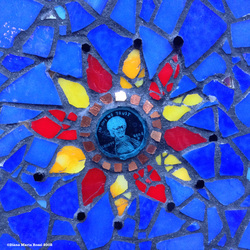 
"Diana Maria Rossi's artwork is featured on the wall of the City parking garage, at the easternmost end of the Gallery display windows on Addison Street. This
piece was initially proposed as part of the Sidewalk Art on Addison Street, but
due to safety reasons Diana Rossi's artwork had to be modified to an upright
orientation and placed on a wall instead of the sidewalk.
The artwork features a stained-glass mosaic that is approximately 25 inches high by 39.5 inches wide. The overall design of this piece consists of heart and leaf shapes linked together to form a larger heart shape. Within the larger heart shape the artist has inserted 47 "magic pennies." Each "magic penny" is comprised of a photographic image of a child, surrounded by bits of copper smalti tile. The individuality of each face highlights the multicultural spirit of Berkeley's populace as well as that of the greater world.
The concept of this piece is to play upon the idea of the lucky penny found in the street. The term "magic penny" originated from a song by Berkeley resident and musician, Malvina Reynolds. An image of Reynolds is also
featured in this piece as a celebration of her creative deeds. With a title like "Good Fortune" this wonderful piece
renews in each of us the hope for a bright future for all children, and in turn for all of us."