Here is one dictionary definition of “epiphany”: “a sudden, intuitive perception of or insight into the reality or essential meaning of something, usually initiated by some simple, homely, or commonplace occurrence or experience.”
I used this piece as the epiphany in a larger body of work, (2011-2015) because the real-life incident that generated my very real need to make this sculpture, was a high/low moment, in how I viewed myself, my talents and lack thereof. “Out of Tune in Color”  was made in response to a very unpleasant interaction that I had with some "fellow" musicians when I belonged to a so-called community concert band. I was humiliated and quit the band, and haven’t really picked up my instrument since. (I had trouble playing in tune.). With this sculpture, I was trying to comment on my experience and trying to redeem myself as a person who does indeed have some technical chops, albeit in a different art form than music (!)


Color, the hues of tone?

The rainbow trapezoidal prism was me trying to show off.

On the other hand, that blue rondelle, was hell to make and nearly drove me crazy, but I am rather proud that I somewhat pulled it off.
I was getting down to using tiny, tiny chips of glass, shards really, in order to create the blending blue.  (For this rondelle,I was inspired by a mosaic, in a Southern California museum, that an acquaintance called to my attention —- The mosaic was from the Arts and Crafts period  [when I find it again, I will link to it!] and there was a portion of that mosaic that had this beautiful shading and made me want to practice my shading skills.  When it works, shading or color blending is a lovely effect in mosaic.  Alas, I came nowhere close to the beauty and technical skill of this other Arts and Crafts mosaic, but I have made peace with this realization.  At least I was inspired to try… and really nothing that I have ever made is ever exactly as I first envision!)

The Pete Seeger quote, around the halo reads: “The easiest way to avoid wrong notes, is to never open your mouth and sing. What a mistake that would be.”  This quote was my message to my detractors from my ill-fated amateur musician experience.
Or, in essence, this quote was a message to myself.

The thin black glass canes in the white iridescent field alludes  to the musical staff.  My husband think it looks like a guitar —- that works too! (I just love it when unintended coincidences, or references, or metaphors happen and show itself in the finished product.
Then, I think,  that maybe I am on the right track!?).

While I was making this piece —- and it was a long time in the making! My Aunt Jean died. I felt bad that I could not attend her funeral, so I determined that I would honor her somehow in the piece that I was working on.  I asked my cousins what kind of music did she like —— did she like music?  Yes, she did and she often listened to Polish polkas and Hawaiian music.  Yes!  What a great combo, as  I happened to love both of those genres, myself.  So.  Aunt Jean appeared, and I knew that I had to have a Hawaiian lei shape, hence the blue rondelle surrounded by a lei, a ring of pink carnations —- pink carnations mean “I will never forget you” in  flower language.  Around the photo of my Aunt Jean, I used red glass beads to symbolize the beads that women wear when they don their Polish folk costumes —- supposedly red beaded necklaces are common (even though I always wore multi-colored beads with my Polish costume), and so I made the necklace around my Aunt Jean in red glass beads (special beads that had once belonged to my friend Carol’s daughter, Lisa).These were my attempts to acknowledge  my Aunt Jean’s love of Polish and Hawaiian music.

Next,  I could feel my Mom, aka Aunt Sophie, having to appear, and as the luck of design would have it,  this sculpture needed another round shape to balance its composition —-  a round shape in “the moon position”.  And since, my Uncle Bucky used to call my Mom, “Moonface” when they were kids, my Mom joined her sister, Jean, on this piece.  And so they are.

Well, I could go on and on about this one sculpture….  for example, there is the music box that I put into another box (on the bottom of the piece).  I had had this quasi- broken music box that once belonged to my Mother-in-law and it happened to play one of my favorite old songs: “Fly Me to The Moon”.  That seemed just perfect —- another moon!  However, the music box only works, somewhat, and some of the time. One needs to wind it up all the way, and it just might tinkle for you. If not, that is okay. It is there, embedded in the piece, and that is what counts.

I used my step-grandfather, Connie’s, musical composition, “The Kiss”, gracing the outside scalloped edge. I also used handwritten band music, written by my great uncle, Phil Cuccurullo, around the bottom, surrounding the music box.  My Uncle Phil played in an Italian-American Community band, managed by my Grandfather, in Stamford, Connecticut, in the 1930’s, (I believe), so I used two of my Uncle's band photos, as well as mine! from 7th/8th grade.

Above the rainbow trapezoidal prism that I hope might evoke a metronome, is  a photo of a metronome face with the words “so out of tune I could just lay down and die”. And under that prism are the letters, " T O N A L V A L U E S",  interspersed with a gray scale.
Beneath that, on the platform, there is an inscription on the frontispiece:
" In the spaces between our thought, action, feeling and soul  lie wisdom, integrity, kindness, humor and patience."
One penultimate note: that is my Aunt Jean’s shiny black and white floor on the bottom and sides of the trapezoidal prism. Black and white checks always speak “floor” to me.
​
Lastly, the title of the round photo, in the middle is “Moonrise over Plum Blossoms/ Berkeley”, and I took that photo from our back yard. 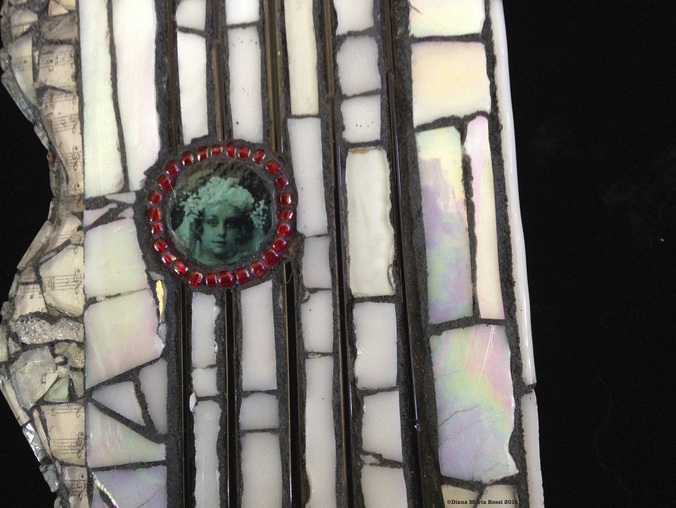 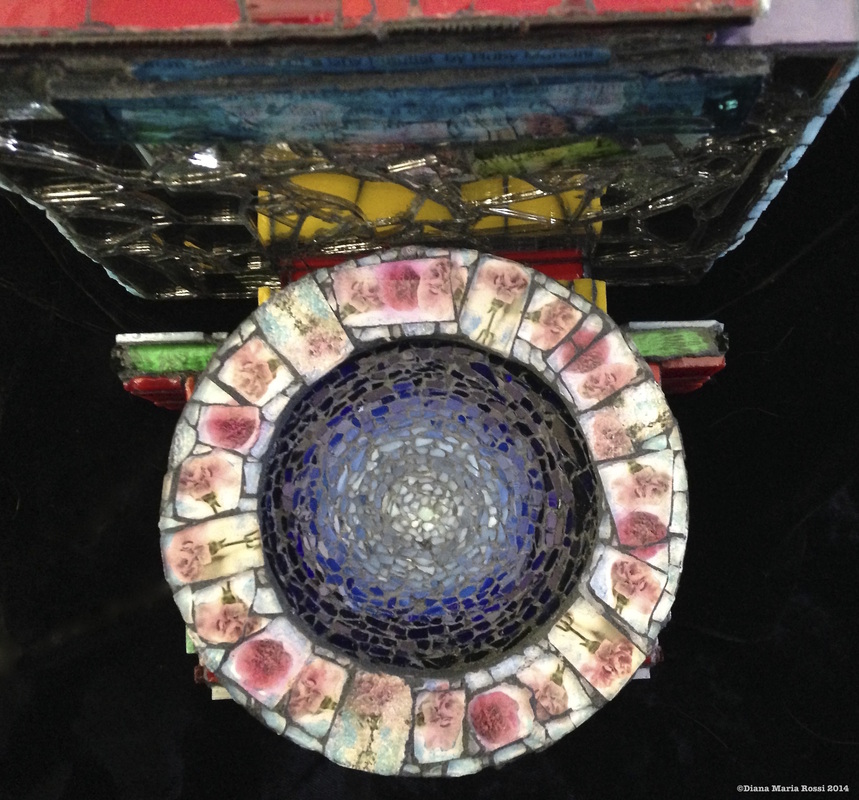 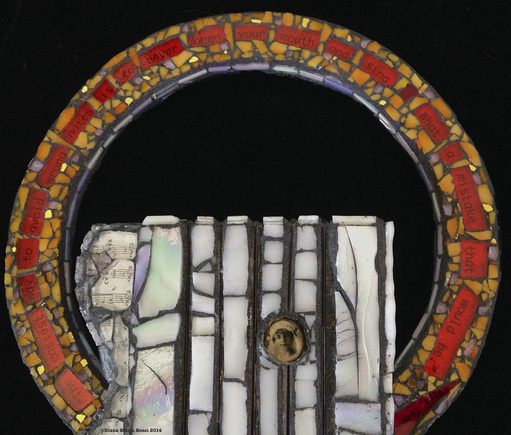